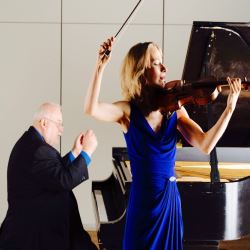 The Dancewicz-Doucet Duo is quickly becoming one of the favorite ensembles on Houston’s art scene. Violinist Dominika Dancewicz and pianist Donald Doucet have been making music together for 5 years, with residency concerts at the University of St.Thomas Cullen Hall, and steadily growing number of our-of-town engagements. The Duo plays compelling, thought-provoking programs that include passionate music of all eras, as well as excursions into jazz and pop. They are not afraid of tackling music dealing with love and loss, freedom and oppression, war and peace. Their performances have been hailed as riveting events, curated to connect with the audiences on a deeply human level, always carrying an important universal message. The Duo’s concerts are excellent educational opportunities for families, music aficionados and students, as the artists always talk about the pieces directly from stage, giving context, history and anecdote to the music they are performing. The Dancewicz-Doucet Duo is committed to providing meaningful and passionate performances to the underserved communities: they have forged a relationship with Houston Methodist Hospital and have appeared at the Crain Garden Concert Series at the Houston Methodist. The Duo’s concert engagements include a regular concert series at the University of St.Thomas in Houston, the Good Shepherd Summer Festival in Lake Charles, Louisiana, Linda Smalley Concert Series in La Grange, Texas, as well as an appearance at the Georgetown Cultural Society Recital Series in Georgetown, Colorado. Future engagements include recitals for the Open Classical Artist Series in Dallas/Fort Worth, Texas, the debut at the Cave Without a Name in Boerne, Texas, as well as recital appearances at the Classical Music Institute Concert Series in San Antonio, Texas, Polish Society Artist Series in Houston, Phil Kramer Recital Series in Missouri City, Texas and Memorial Classical Music Series in Houston. 2018 marks the arrival of The Duo’s first album! The self-titled debut CD presents Violin Sonatas by Edward Elgar, W.A.Mozart and Claude Debussy, outlining the artists’ stylistic diversity. More information about The Duo: www.theddduo.com