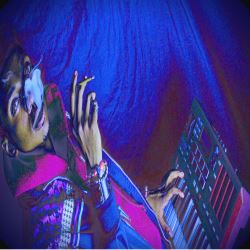 Saint Matt (Saint) is from a background of humble beginnings growing up in a small rural town in North Carolina. He was often ridiculed by students and teachers alike. He was always considered weird, but when it was discovered he was living in an impoverished situation, that escalated the ridicule and mockery. During the summer of 2009 Saint got a reprieve from the constant taunting when he visited California. Because all the industry had left his small town of existence, in 2010 his family decided to take a chance and move to California in an attempt to give Saint and his siblings a better shot at life. What was meant to be a fresh start almost became the end of Saint. The culmination of all the pain in his life was more than he could bear and he attempted to take his life. He survived, but in order to remain alive he had to release the pain. The source of his salvation, his muse, his life was found in his music.